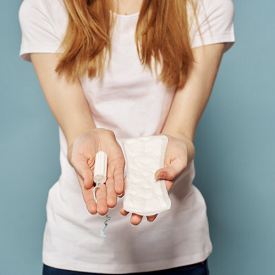 Sex is supposed to be an enjoyable experience. However, there are times when the joy can turn to fear, particularly for women who experience bleeding after intercourse. According to Marla Ahlgrimm, postcoital bleeding is not uncommon, but it might be cause for concern.
Q: What causes bleeding after sex?
Marla Ahlgrimm: There are many potential causes of postcoital bleeding. One of the most common is pelvic inflammatory disease. Vaginal dryness, cervical polyps, and, in extreme cases, cervical cancer are also known issues that can trigger bleeding after intercourse. However, often, bleeding after sex may be the result of the cervix shedding its lining, which can happen several days before and after a woman’s period.
Q: How do I know what’s causing my postcoital bleeding?
Marla Ahlgrimm: It happens outside of your period, it’s probably best to see your doctor. They will likely administer a pregnancy test and a pelvic examination. This involves inserting two fingers into your vagina to manually feel for abnormalities. Your physician will also insert a speculum into your vagina to look for issues not felt. This exam will feel much like a routine Pap smear/visit to your gynecologist.
Q: Can bleeding be triggered by rough sex?

Marla Ahlgrimm: Yes, women who have not had sex for some time or are having sex with a new partner, particularly one with a large penis may experience tearing that can cause bleeding.
Q: Is postcoital bleeding painful?
Marla Ahlgrimm: Usually no. However, pain during sex, called dyspareunia, may be caused by any number of conditions and can also include bleeding. If you find sex uncomfortable, talk to your doctor about possible physical causes, and do not be shy about discussing new positions with your partner to ensure that intercourse is pleasurable for you both.
Posted by Marla Ahlgrimm at 12:12 AM