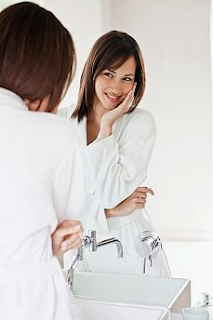 Often harmless, many women experience mild to moderate changes in their skin pigmentation throughout their lives. However, as Marla Ahlgrimm explains, dermal anomalies are worth checking out.

Marla Ahlgrimm reports that one of the most common reasons for loss of pigmentation is vitiligo, especially in people of African or Southern European descent. Vitiligo often start out as a slight bleaching of the skin and gradually becomes more noticeable with age. While not harmful, vitiligo may indicate other issues, such as a thyroid disorder.

Melasma, the mask of pregnancy, is the opposite of vitiligo. When a woman is pregnant, her skin cells sometimes produce more pigment, which can result in a brown to gray-brown tint on the face. 90% of melasma cases are in women and it is widely believed to be associated with hormones, says Marla Ahlgrimm.

Believe it or not, your mother wasn’t kidding when she said you could use lemon to bleach your hair. Unfortunately, the same is true for your skin. Marla Ahlgrimm says women who have contact with citrus fruits, including lemons and limes, may experience patchy discoloration on the hands or, as is the case with mixed beverages, around the mouth. The condition, known as phytophotodermatitis, is triggered by a combination of citrus juice and sunshine. It is temporary and normally fades within a few months.

There are a number of conditions that can result in oddly-colored skin. For instance, Addison’s disease. Pres. John F Kennedy is one of the most famous figures in history to have the adrenal condition, which results in a sun-kissed glow without exposure to the outdoors. Skin darkening and thickening around the folds of skin may indicate acanthosis Nigricans, one little known side effects of diabetes. Marla Ahlgrimm asserts that the most alarming form of skin discoloration is melanoma, which can occur in dark patches or more widespread with a slight bluing of the skin.
Posted by Marla Ahlgrimm at 3:30 PM